Although born in New York City, Dr. Goett has lived in Florida since a young age, and why he refers to this lovely state as ‘home.’

Being a Floridian at heart, it made sense for him to attend the University of Florida in Gainesville, where he completed an undergraduate and veterinary degree at UF College of Veterinary Medicine.

With his degree in hand, Dr. Goett expanded his horizons with a rotating internship at Michigan Veterinary Specialists, followed by a surgical internship at Hollywood Animal Hospital.

His next step was to South Carolina Surgical Referral Hospital for his surgical residency, after which he helped launch a surgery department at an animal emergency hospital in Pensacola where he used his knowledge and skills to care for sick and injured animals for seven years. In 2014 he accepted a leadership role at a veterinary hospital in Melbourne, FL, where he ran the Surgery department for seven years.

In 2008, Dr. Goett’s hard work and dedication paid off with a board certification, earning him the title – Diplomate, American College of Veterinary Surgeons (DAVCS).

While experienced in all areas of surgery, Dr. Goett is particularly interested in fracture repair, and the specialized field of minimally invasive surgery.

Outside of work he enjoys spending time with his wife and two younger daughters, as well as fishing and kayaking – and learning to play the banjo. 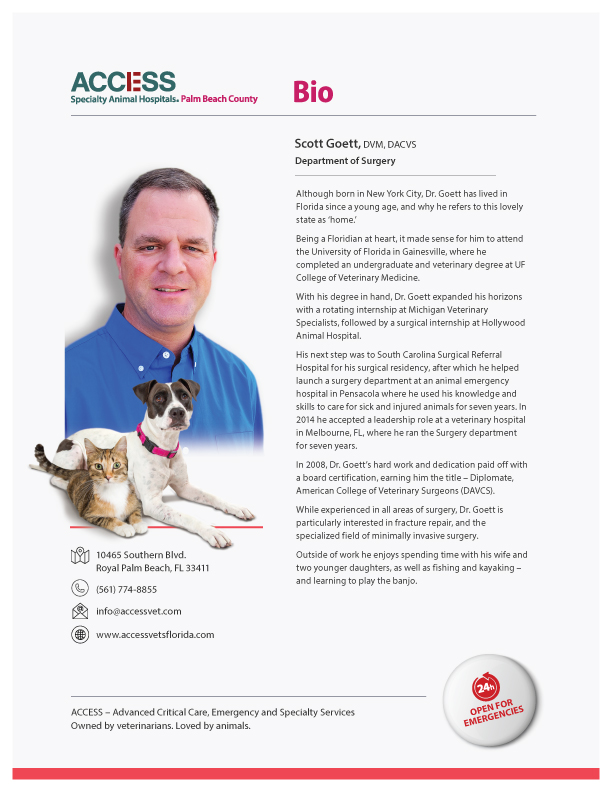